Deputy Minister of Foreign Affairs Martin Tlapa visited Kenya from 19 to 22 September 2021. He held political consultation with Principal Secretary to the Ministry of Foreign Affairs of Kenya Macharia Kamau, he met with the Head of the Nairobi Metropolitan Services and Deputy Minister of Health General Mohamed Badi. Deputy Minister Tlapa also met with members of the business community. Considering the impact of the Covid-19 pandemic, great attention during the visit was devoted to deepening of cooperation in the field of health. The Czech Republic will help Kenya by providing vaccines and equipment for hospitals and medical centres.

Kenya belongs among the most promising economies in sub-Saharan Africa; its economy grew annually by 5 – 7 per cent. Agriculture represents significant part of its GDP; two thirds of GDP are generated by services that are growing thanks to the development of tourism and information technologies. Kenya is the leading economic power of the East African Community. Kenya belongs among important economic partner of the Czech Republic, with bilateral trade of approx. 35 - 40 million USD p.a..

During the bilateral consultation, Deputy Minister Tlapa and his counterpart Principal Secretary Kamau both showed interest in developing strategic cooperation. Deputy Minister Tlapa assured his partner that, assuming the EU Presidency of the Council of European Union in second half 2022, the Czech Republic will support more close cooperation between the EU and African countries. Both Deputy Ministers appreciated the positive development of the bilateral economic relations. Health care, agriculture and water management were identified as perspective fields for deepening of economic cooperation. The Czech Republic appreciates the stabilization role played by Kenya in the region and supports Kenya in tackling the Islamic terrorism through intensive bilateral cooperation in the defense sector. The Czech Republic highly appreciates successful cooperation with Kenya in protection of endangered wildlife. The projects for saving the northern white rhinos and renew the population of cheetahs are very unique in this regard. Deputy Minister Tlapa invited his counterpart to visit the Czech Republic and, at the same time, reminded him of the invitation for the Kenyan Minister of Foreign Affairs.

The need for a joint approach in combating the Covid-19 pandemic was underlined during discussion with Deputy Minister of Health Mr. Rashid Aman. The Czech Republic will help Kenya by providing vaccines. Concrete possibilities for cooperation between private companies from both countries were discussed with the members of the Kenya Health Care Federation and Africa Health Care Federation during the working dinner. Concrete missions of Kenyan businesspersons to the Czech Republic were agreed upon during contacts with the representatives of the business community.

During his meeting with students of the St. Philip Nyeri Primary School, Deputy Minister Tlapa personally delivered colour pencil sets, a present from the Czech company Koh-i-noor. As a reward, students sung Czech folk songs, which they performed flawlessly in Czech language and accompanied them with typical African dances. 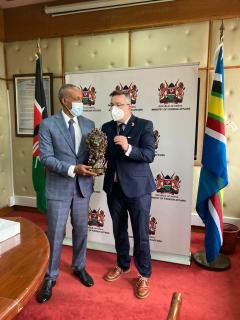 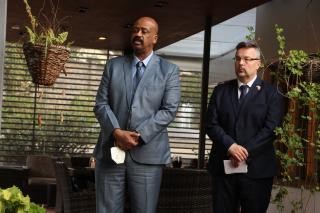 Last news from the section World: