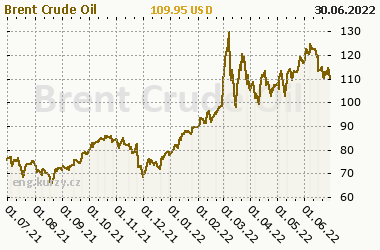 Brent refers to a type of oil, including 15 kinds of oil from North Sea fields, consisting primarily of Brent Crude, Brent Sweet Light Oil Oseberg and Forties. Price of Brent crude oil is used in the valuation of two-thirds of world oil supply - particularly the supply of oil consumed in Western Europe and from Europe, Africa and the Middle East. Other known types of oil OPEC Reference Basket includes, Dubai Crude and West Texas Intermediate (WTI) Crude Oil.

Brent crude gained its name by goose brent, under which they were named the oilfields in the North Sea companies Exxon and Shell.

Symbol for Brent crude oil is "SC." Originally traded only on the International Petroleum Exchange in London, but since 2005, also traded on the Intercontinental Exchange, known as ICE. One contract of Brent crude oil has a value of 1,000 barrels (160 m3) and traded in U.S. dollars.

Brent used to be usually about about $ 1 cheaper than WTI and $ 1 more expensive than OPEC Basket. Since 2007, Brent crude traded with a difference of approximately 1 to 3 U.S. dollars for WTI, which is probably connected with the gradual depletion of North Sea fields and the reduction of mining.